If you are an individual who is interested in decentralized governance, you may have come across words such as “Quadratic voting” and “Quadratic funding.” While some may consider these as buzzwords, these concepts have gained considerable traction over the past few years. There have been several instances where both have been implemented, meeting with a high degree of success. Quadratic voting was used to vote on winning projects during the Taiwanese Presidential Hackathon. We saw the system used again when the Colorado Democratic Party used it to determine their party platform. On the other hand, Quadratic funding was used by Gitcoin Grants to fund public goods in the Ethereum ecosystem.

Both concepts, according to their proponents, have the potential to revolutionize how decisions are made. The ultimate implementation of these concepts could be, in the words of Vitalik Buterin, “deeply transformative as the industrial-era advent of mostly-free markets and constitutional democracy.” The hype is not without any reason, as this article will explain, looking at both concepts and their application and benefits.

The Problem With Governance Models

The governance models utilized by blockchain platforms are becoming increasingly crucial, with their ability to impact user participation, platform efficiency, and attractiveness. One of the biggest concerns blockchains had when it came to governance was the potential for the emergence of dominant positions. These “dominant positions” would be made up of users who would have, under their control, a large number of votes or perhaps even a majority of the votes. This would give this group of users unprecedented control over matters related to the platform’s evolution.

Such a concentration of voting power may discourage users with a smaller number of votes from participating in governance mechanisms or even force them to leave the platform entirely. The promise and potential of blockchain technology and platforms can only be fulfilled if close, thoughtful attention is given to the governance mechanisms of these platforms. Such a concentration of votes and voting power would, doubtless, worry others on the platform. However, a new voting method, which in recent times has found utility in racing social decisions, is emerging as a possible solution to the dilemma plaguing blockchain platforms.

Quadratic Voting: The Mathematical Way To A Fairer Vote

Quadratic voting is a collective decision-making mechanism that enables a better avenue towards making decisions, avoiding the so-called “tyranny of the majority.” It was first proposed by political economist Glen Weyl and allows participants to express the direction of their preferences, the degree of their preferences, and how strongly they feel about them. Through this, it hopes to address the issue of majority rule and protect the interests of smaller groups of voters that care deeply about specific issues. Quadratic voting allows users to “pay” for additional votes on a particular matter, enabling them to express their support more strongly for specific issues.

While a regular poll may ask whether you agree or disagree with a particular set of issues, Quadratic voting gives voters a budget of “voice credits” that they can spend to agree or disagree with issues. Voters can cast multiple votes, but each subsequent vote would cost more credits than the last. This type of voting mechanism can be utilized in different areas, such as democratic institutions, corporate governance, and blockchain-enabled collective decision-making.

Quadratic voting was first proposed by:

How Does Quadratic Voting Work?

Now, let’s take a look at how Quadratic voting functions. Quadratic voting is based on market principles, with each voter being allocated a budget of vote credits that they can spend to influence the outcome of key deliberations. If a voter strongly supports or opposes a particular decision, they can allocate additional votes to demonstrate the level of their support or opposition to a specific decision. The cost of additional votes is determined through a vote pricing rule, with each vote becoming more expensive than the last. The increasing voter credit cost demonstrates the degree of support or opposition towards a particular decision.

Quadratic voting uses a simple formula, cost to the voter = (number of votes)2

Let’s understand this better with the help of an example. Let’s assume a voter has a budget of 16 vote credits and has the liberty of using one credit for 16 different issues that they can vote on. However, If the voter feels more strongly about one particular issue, they can allocate four votes toward that issue at the cost of their entire budget. The four votes cost all 16 vote credits because the cost of each additional vote becomes more expensive quadratically. So 1 vote would cost 1 credit, 2 votes would cost 4, 3 votes would cost 9, and the 4th vote would cost 16.

This mechanism has been viewed as one potential solution to address governance problems faced by blockchain platforms and communities, preventing a single group from taking over while also protecting the interest of minority groups. The tokens cast as votes are redistributed evenly between voters at the end of each governance cycle. It would take a group several voting cycles and significant costs to take control of a platform.

There are several types of semi-proportional voting systems. However, none of these account for the degree of voters’ preference or opposition to issues.

Let’s move on to Quadratic funding. Quadratic funding is one of the most innovative socio-economic experiments to have come out of the crypto ecosystem. It has been touted as a mathematically optimal way to fund public goods in democratic communities by amplifying donations made by a large community over contributions made by smaller groups with deep pockets. But what are public goods?

Public goods are defined as commodities or services that are available to all members of society. These goods must have the following qualities.

Quadratic funding was outlined by Vitalik Buterin, Zoe Hitzig, and Glen Weyl in a research paper published in 2018. However, for the sake of understanding, we should simplify the concept. The driving force behind Quadratic funding is its matching pool, a pool of funds provided by individuals, companies, and protocols collectively known as matching partners. Funds collected in the matching pool are utilized to magnify individual project contributions. Let’s go through a quick example to understand the concept better.

Let’s assume we have $10,000 in a matching pool and three projects participating in a funding round. Project A gets $1000 in funding from 5 contributors that pitch in $200 each. Project B receives $1000 from 2 contributors, each pitching in $500. Project C also receives $1000, but from 20 contributors, each pitching in $50. Now, the matched amounts are calculated using the Quadratic funding formula. Going by the formula, the first project gets an additional $1851.85, 185% more than the contributed amount. The second project receives $740.74, an additional 74% of the total contributions, while the third gets $7407.41 of the matched funding, a staggering 740% of the original contribution.

Let’s look at how the formula arrives at these values.

Quadratic funding helps address a problem called the “tragedy of the commons.” This is an economic problem where each individual has the incentive to consume resources at the expense of others, with no way of excluding anyone from consuming the resource, leading to overconsumption and resource depletion. Quadratic funding puts emphasis on the number of donations rather than the size of the donation. Projects bringing in more donations are representative of public goods serving a larger group of users, making the tragedy of commons more severe.

As a result, projects serving a more extensive group are assumed to be backed by more donors, resulting in higher donations from the matching pool. This is why project C received the highest match funding in our earlier example.

Quadratic funding emphasizes on which of the following?

Use Cases Of Quadratic Voting And Quadratic Funding

The Colorado State Legislature has used Quadratic voting to decide which appropriation bills must be funded by the house first. With legislatures more likely to sponsor their own bills and vote for those, the Democrats used Quadratic voting to determine which bills had support across the board. Each legislature was given a budget of 100 credits, where one vote would cost them one token. However, legislatures could cast more votes toward an issue, with the cost of each vote increasing quadratically, as shown below. 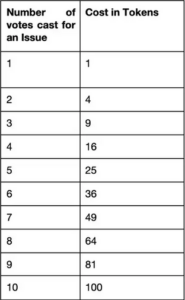 The Taiwanese Presidential hackathon was also judged through Quadratic voting.

When it comes to Quadratic funding, the most prominent example is that of Gitcoin, which uses the method to raise funds. Gitcoin enables the community to create and fund projects and has supported various projects, including Uniswap, Finematics, Kickback, and others. Vitalik Buterin uses Gitcoin Grants to discover new projects, while Andre Cronje used it to fund Yearn Finance.

Where has the concept of Quadratic voting been put into practice?

Traditionally, modern democracies have used the one person-one vote method, while corporations have adopted slightly more sophisticated voting mechanisms. However, more democratic voting systems, such as Ranked Choice Voting and Proportional Voting, have failed to gain traction thanks to the complexity involved. Quadratic voting, by allowing voters to express their preferences and the intensity of these preferences, helps protect the interests of smaller groups within communities.

Quadratic funding, while a relatively new concept, has made a considerable impact, with over $2 million distributed to public goods. A growing number of projects are exploring Quadratic funding, chief among them being Gitcoin Grants, clr.fund, and Downtown Stimulus. However, both concepts have the potential to radically change how blockchain protocols are governed and funded.

Which are the most prominent projects exploring Quadratic funding?

Now let’s try it IRL – have your Quadratic say, (L)Earner!

Please login to see this form