The growth of DeFi has brought NFTs into mainstream focus, and the growth of NFTs has also brought several problems into sharp focus. Ethereum has a monopoly over this sector, with many NFTs created on the Ethereum blockchain. So what is the problem with creating NFTs on one of the most popular platforms in the world? The issue of high gas fees. Ethereum has a big problem when it comes to fees which can potentially cross hundreds of Dollars, which makes it very impractical.

So what are the options when it comes to NFTs and NFT projects? What other choices do they have? The NEAR Protocol has several important projects on its platform and is often touted as the Ethereum killer. The NEAR Protocol is a scalable blockchain that simplifies and accelerates the development of dApps. At the moment, there are 19 decentralized platforms and NEAR NFT Marketplaces to mint and trade NFTs on the NEAR blockchain. The NEAR Protocol has a significant advantage over Ethereum, as it is significantly faster than Ethereum, and transactions cost next to nothing, making it an ideal platform for trading in NFTs

NEAR Protocol And NFTs

The NEAR Protocol is the perfect platform for NFTs as it has many advantages over Ethereum. The protocol is significantly faster than Ethereum. Ethereum also has substantially higher gas fees, while NEAR allows transactions to be processed for a negligible fee. These factors make NEAR ideal for buying and selling NFTs.

As mentioned earlier, there are already several NFT projects that have been created on the NEAR blockchain. However, before taking a look at the projects, let us briefly understand the concept of NFTs.

The Meaning Of Non-Fungible

What Is An NFT?

NFTs are digital certificates of ownership for digital assets. An NFT is a smart contract that is utilized for securing a digital asset. Once written, it is published into a token (ERC-721) on the blockchain. Anything can be turned into an NFT, with the most popular being videos, GIFs, or JPEGs.

Which of the following is an NFT?

NFT Projects on NEAR Protocol

Currently, there are several NFT platforms on NEAR so let us look at some of the more popular projects on the platform.

Mintbase started in 2018 and was created by Nate Geier and Calorine Wend. Nate Geier is the company’s CEO, while Caroline is the COO, utilizing her management and business development expertise. Mintbase managed to raise $1 million from a seed funding round in 2020. Sino Global led the round and also consisted of other VCs such as Block Oracle Capital, D1 Ventures, and other angel investors.

The Mintbase platform allows users to create and sell NEAR NFTs. Users can mint different digital assets as NFTs. These assets could range from event tickets to crypto art and everything in between.

Mintbase allows pretty much anyone with access to the internet to make an NFT and make it available for sale in their NEAR NFR marketplace or on NFT marketplaces like OpenSea. Minters can create a smart contract and limit the transferability of the tokens minted, helping prevent fraud or the illegal transfer of unique items. Mintbase is focused on creating an NFT creation experience that is unique, which is why, as mentioned earlier, it supports different digital assets. This is contrary to competing platforms that focus on one specific NFT category.

Why Did Mintbase Switch To NEAR?

So why the switch from Ethereum to NEAR? The answer is Gas fees. Ethereum Gas fees had started to become ridiculously expensive. To mint NFTs on Mintbase, a user needs to create a digital store. This involves the user creating a smart contract and pay Ethereum a Gas fee. Initially, the fee was low, and users were able to deploy the store quickly. However, with increasing congestion on the Ethereum network, the fees started to get higher and higher, with store creation costing hundreds of dollars. The cost became so high that Mintbase had to tell its users to wait for Gas prices to drop before deploying a store. Ethereum quickly became untenable to buy, sell or create NFTs.

Mintbase saw NEAR as a better platform compared to Ethereum, with significantly lower Gas fees thanks to a more efficient contract execution model. It also uses Nightshade, a dynamic approach to Sharding. However, there are several other reasons why Mintbase switched to NEAR.

Why did Mintbase switch to NEAR?

Paras was created with a vision of providing the solution to aging traditional collectible cards. The platform validates ownership through the blockchain through fast and inexpensive transactions. The platform focuses on creating crypto-native collections which can be further diversified into more prominent mediums.

Paras is able to take a curated approach and create an NFT community and experience. Paras ensures consistency and quality by selecting artists and formats. Artists can create new cards on Paras only after being approved, and the number of new artists approved is limited to 30 artists per week. Artists are also required to conform to the standard 64:89 aspect ratio.

Since the platform’s launch, artists on Paras have already made more than $25,000, with the platform able to facilitate a trading volume of more than $35,000 from more than 700+ transactions. The platform has more than 80 active collectors and over 70 artists. The low minting fee keeps the entry barrier for digital artists pretty low, and artists can mint cards without worrying about the minting cost.

Why Is NEAR A Great Fit For Paras?

Because demand for space on Ethereum is driving up costs on the platform, newer NFT creators are looking for alternatives and solutions. NEAR is working with Ethereum on an interoperable solution. Transactions on NEAR cost only a few cents, and sometimes even less. The NEAR wallet is highly efficient, and transactions are completed almost instantly. The Rainbow bridge ensures that NEAR will be interoperable with assets based on Ethereum.

Learn NEAR Club is also issuing our own generated PFP NEAR NFTs – (L)Earner.
(L)Earner NFT collection is a collab between LNC community and one of the best award winning graphic designers in Europe.

Art concept is based on dynamic human intelligence diversity powered by uniqueness of every learner.

Nerve endings are similar in all people but are unique in each. The concept of this collection is built on the connections of impulses that occur during the process when we learn. It is part of the map of our experience of getting any information. From learning a new word to learning a new skill these nerve impulses are generated by a machine in an attempt to study the human experience. 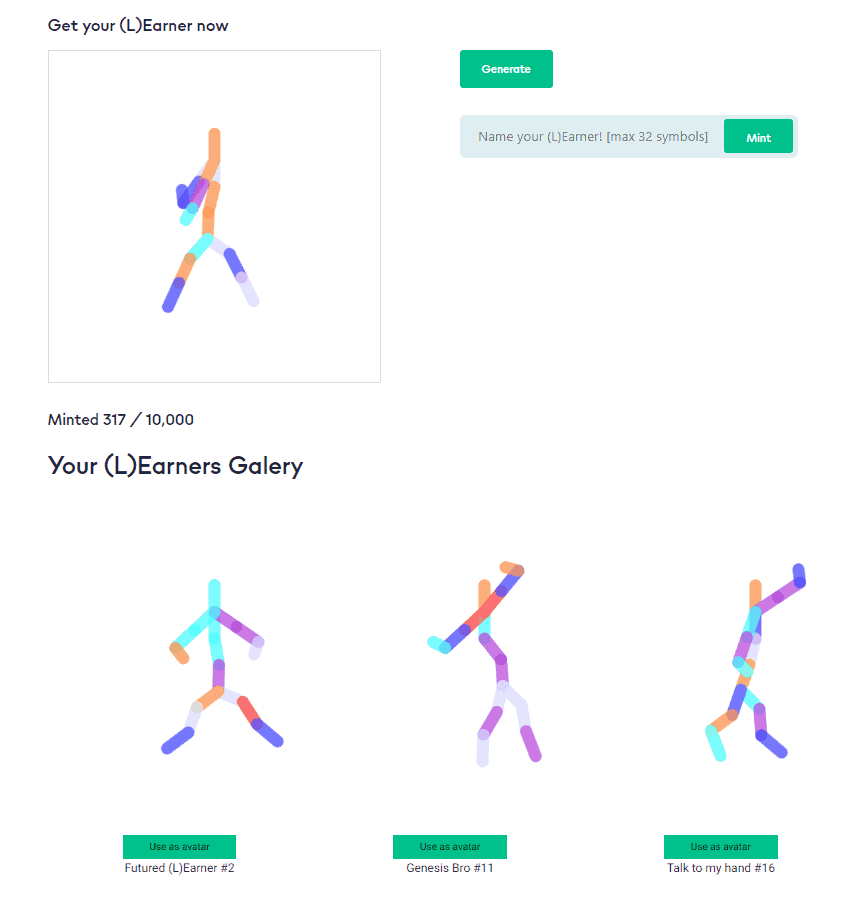 Every NFT minter is invited to creatively participate in this project:

The cost of minting is set to 2 $NEAR for the first 250 mints so it is supposed to be affordable for every Learn NEAR Club member.
Minting cost is gradually increasing with every mint and will reach 10 $NEAR for (L)Earner #10,000 mint. (L)Earner NFT holders also get benefits at Learn NEAR Club:

Hip Hop Heads was born out of a collaboration between the Universal Hip Hop Museum, The NEAR Protocol, and Ed Young. Together they decided to create an NFT collection that featured artists from the 70s to the present. The collection, called NFT.HipHop Heads will feature 47 of the biggest rap artists and will honor not only the artists but also mark the 47th year of the Hip Hop era. The project reconnects with the roots of rap using the latest technological advances.

Each illustration will exist as a collection of 47, signifying 47 years of the Hip Hop era. The First Edition of each Hip Hop Head is named depending on the artist’s place in the history of Hip Hop. The significance of each artist is demonstrated through an illustration created by Andre LeRoy Davis. The background animation code is a result of the most significant numbers in the history of Hip Hop that demonstrate the passage of the Hip Hop era over the course of 47 years. The NFT collection will be auctioned every day on its website until the 24th of July.

Why Did Hip-Hop Heads Choose NEAR?

The NEAR Protocol allows the Hip Hop Heads collection to be more accessible to the general population. As mentioned earlier, the collection will be auctioned daily until the 24th of August and can be purchased by credit card. This allows NEAR to make the project more viable. The auction marketplace also brings into sharp focus the NEAR Protocol’s features such as a familiar and friendly interface similar to web-2, easy and relatively cheap NFT minting, and end-user accessibility.

Because users can purchase the NFTs using a credit card, the marketplace offers a simple way of purchasing NFTs without any complicated steps that make users jump through hoops. NFT royalties on the NEAR Protocol are written into the NFT code, allowing creators to gain royalties from secondary sales, even if the NFT moves to another marketplace. This is possible thanks to NEAR’s contract-level NFT standard. NEAR gives the artists and creators control of their NFT, allowing them to benefit from their work.

After the tremendous success of Cryptopunks, Solpunks, and Tpunks, NEAR will finally have its own version of the project, called Npunks. As with the original Punks project, there will be 10,000 unique NPunks with their own rarity traits. The collection will have 9 aliens, 24 apes, 88 zombies, and 111 bots. 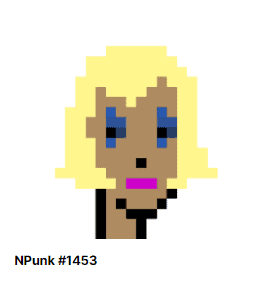 To avoid hoarding and ensure fair participation, everyone has the chance to buy one (or more Npunks). The purchases are made randomly and the identity is kept a mystery until the transaction is deemed complete. Users are free to sell their Npunk in the secondary market post-mint. Back in November 2021, 1,923 Misfit NFTs were sold out in under 36 hours. As of now, you can buy these NFTs on NEAR NFT marketplaces like Paras and Mintbase.

NEARNauts is a community-driven, randomly generated NFT that aims to grow an organic and loyal community around the project. A pool of rare traits ensures verifiable uniqueness. This Verifiable Random Function (VRF) includes three algorithms – generated, proof, and verification. NEAR is making building and deploying dApps easier, faster, and cheaper than any other blockchain protocol and is one of the most promising projects in the crypto space. It addresses several issues faced by projects on Ethereum, such as high gas fees and slow processing speeds. It also has several advantages over the Ethereum blockchain thanks to its sharded solution.

The NEAR Protocol has shown significant promise, utilizing Sharding to solve issues faced by other blockchains. Thanks to this approach, NEAR is able to increase throughput without compromising on security. The NEAR Collective ensures that engineers and developers are constantly working on the protocol.