NEAR uses human readable account IDs instead of a public key hash. For a 20-minute video explanation, see this Lunch and Learn on YouTube.

Top-level account names (TLAs) are very valuable as they provide root of trust and discoverability for companies, applications and users. To allow for fair access to them, the top-level account names that are shorter than MIN_ALLOWED_TOP_LEVEL_ACCOUNT_LENGTH characters (32 at time of writing) will be auctioned off.

We are not going to deploy the registrar auction at launch. Instead we will allow it to be deployed by the NEAR Foundation at some point in the future.

Try it out using our near-cli command, near create-account, in your terminal.

Implicit accounts work similarly to Bitcoin/Ethereum accounts. They allow you to reserve an account ID before it’s created by generating a ED25519 key-pair locally. This key-pair has a public key that maps to 64 character hex representation which becomes the account ID.

Dev accounts are special accounts made automatically by tools like near-cli and the wallet to help you automate testing and deploying of contracts. Since every account can have a contract, but re-deploying contracts DOES NOT create new state, you often want to deploy to a completely different account when testing.

Note: When deploying multiple test examples and creating new dev accounts, you will need to "Sign Out" of the NEAR Wallet on any localhost examples and "Sign In" again! Signing in adds an access key to your account and saves the private key in localStorage so the app can call contract methods without asking for approval again. BUT! There’s a chance you’re now trying to interact with a contract that is deployed on a completely different dev account.

How do I get another one

NEAR uses human readable account IDs instead of a public key hash as the account identifier and many keys (public/private key pairs) can be created for each account that we call "Access Keys". Currently, there are two types of access keys; FullAccess & FunctionCall.

As the name suggests, FullAccess keys have full control of an account similar to having administrator privileges on your operating system. With this key you have the ability to perform any of the eight action types on NEAR without any limitations.

A FunctionCall key is unique as it only has permission to call a smart contract’s method(s) that do not attach Ⓝ as a deposit (i.e. payable functions). These keys have the following three attributes:

Note: If no specific method names are specified, all methods may be called.

The easiest way to create a FunctionCall key with your dApp is to prompt users to sign in using NEAR Wallet via near-api-js‘s WalletConnection. This prompts users to authorize access and upon approval a FunctionCall key is created. This key is only allowed to call methods on the contract that redirected the user to NEAR Wallet with a default allowance of 0.25 Ⓝ to cover gas costs for transactions. As non-monetary transactions are performed with this key, you will notice the allowance decreases and once 0.25 Ⓝ is burnt a new key will need to be created. If a request is made to transfer ANY amount of tokens with a FunctionCall key, the user will be redirected back to wallet to authorize this transaction. You can see this functionality in action by trying out NEAR Guestbook.

Another way to create a FunctionAccess key is to use near-cli‘s add-key command. With near-cli you can be more specific with your FunctionCall key by only allowing it to call specific contract methods as well as make adjustments to the allowance amount.

FunctionCall access keys are a powerful usability feature of NEAR opening up many possibilities. Not only can you eliminate the need for users to authorize small transactions over and over again but you could even allow a user to interact with the blockchain without ever having to create an account. This can be accomplished by having the dApp automatically create a FunctionCall key that points to itself with a single click on your front-end allowing anyone to interact with your dApp seamlessly.

If you’re familiar with development on Ethereum, it’s worth making a quick note about how accounts are different. The image below summarizes some key differences. 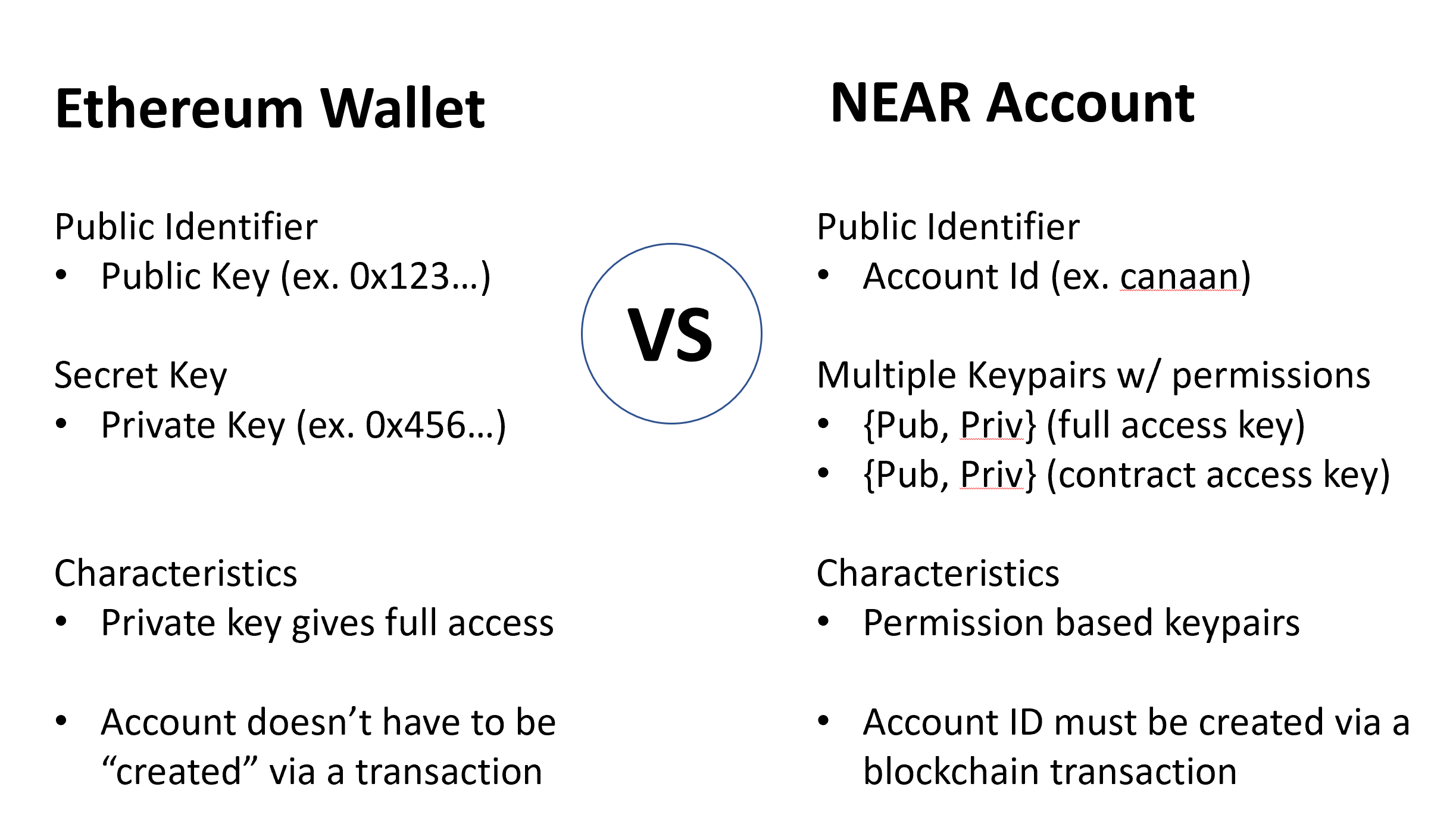 Each NEAR account can only hold 1 smart contract. For applications where users should be able to organize multiple contracts you can create "subaccounts" whose "master account" is the user account. The format of a subaccount would include a dot in the name like contract1.user-A-account, contract2.user-A-account, etc. NEAR restricts the creation of accounts with a dot in the name such that these accounts can only by created by user-A-account, as if the user account is a top-level domain like your-company.com if you’re familiar with this model.

Note for this to work you will need to login with NEAR CLI and authorize it to use the master account (YOUR_ACCOUNT.testnet) on your behalf. Learn more about NEAR CLI here

Ask it on StackOverflow!