In this tutorial, you’ll build off the work you previously did to implement the minting functionality on a skeleton smart contract. You got to the point where NFTs could be minted and the wallet correctly picked up on the fact that you owned an NFT. However, it had no way of displaying the tokens since your contract didn’t implement the method that the wallet was trying to call.

Today you’ll learn about deploying patch fixes to smart contracts and you’ll use that knowledge to implement the nft_tokens_for_owner function on the contract you deployed in the previous tutorial.

Upgrading contracts, when done right, can be an immensely powerful tool. If done wrong, it can lead to a lot of headaches. It’s important to distinguish between the code and state of a smart contract. When a contract is deployed on top of an existing contract, the only thing that changes is the code. The state will remain the same and that’s where a lot of developer’s issues come to fruition.

The NEAR Runtime will read the serialized state from disk and it will attempt to load it using the current contract code. When your code changes, it might not be able to figure out how to do this.

Modifications to our contract

In order for the wallet to properly display your NFTs, you need to implement the nft_tokens_for_owner method. This will allow anyone to query for a paginated list of NFTs owned by a given account ID.

To accomplish this, let’s break it down into some smaller subtasks. First, you need to get access to a list of all token IDs owned by a user. This information can be found in the tokens_per_owner data structure. Now that you have a set of token IDs, you need to convert them into JsonToken objects as that’s what you’ll be returning from the function.

Luckily, you wrote a function nft_token which takes a token ID and returns a JsonToken in the nft_core.rs file. As you can guess, in order to get a list of JsonToken objects, you would need to iterate through the token IDs owned by the user and then convert each token ID into a JsonToken and store that in a list.

As for the pagination, Rust has some awesome functions for skipping to a starting index and taking the first n elements of an iterator.

Let’s move over to the enumerable.rs file and implement that logic:

This should output a warning saying that the account has a deployed contract and will ask if you’d like to proceed. Simply type y and hit enter.

Once the contract has been redeployed, let’s test and see if the state migrated correctly by running a simple view function:

This should return an output similar to the following:

Go team! At this point, you can now test and see if the new function you wrote works correctly. Let’s query for the list of tokens that you own:

Viewing NFTs in the wallet

Now that your contract implements the necessary functions that the wallet uses to display NFTs, you should be able to see your tokens on display in the collectibles tab. 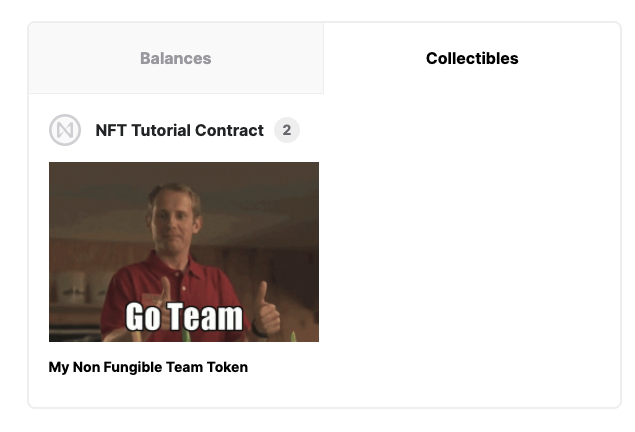 In this tutorial, you learned about the basics of upgrading contracts. Then, you implemented the necessary modifications to your smart contract and redeployed it. Finally you navigated to the wallet collectibles tab and viewed your NFTs.

In the next tutorial, you’ll implement the remaining functions needed to complete the enumeration standard.