This will be the final section in this chapter, where we’ll add a simple frontend using React and near-api-js to communicate with the smart contract.

There will be three main files we’ll be working with:

We’ll go over a pattern that may look familiar to folks who have surveyed the NEAR examples site. We’ll start with an asynchronous JavaScript function that sets up desired logic, then pass that to the React app.

Let’s talk through the code above, starting with the imports.

Next, we define an asynchronous function called initCrossword that will be called before passing data to the React app. It’s often useful to set up a connection with the blockchain here, but in our case all we need to do is retrieve the crossword puzzle solution as a hash. Note that we’re attempting to pass this environment variable NEAR_ENV into our configuration file. NEAR_ENV is used to designate the blockchain network (testnet, betanet, mainnet) and is also used in NEAR CLI.

Lastly, we’ll call initCrossword and, when everything is complete, pass data to the React app contained in App.js.

Here’s a large portion of the App.js file, which will make use of a fork of a React crossword library by Jared Reisinger.

We’ll discuss a few key points in the code above, but seeing as we’re here to focus on a frontend connection to the blockchain, will brush over other parts that are library-specific.

The two imports worth highlighting are:

The onCrosswordComplete and checkSolution blocks of code fire events to check the final solution entered by the user, hash it, and compare it to the solutionHash that was passed in from the view-only call in index.js earlier.

Finally, we return the JSX for our app and render the crossword puzzle! In this basic case we’ll change this heading to indicate when the user has completed the puzzle successfully:

We’ll only focus on the second method:

This API doesn’t look warm and friendly yet. You caught us! We’d love some help to improve our API as detailed in this issue, but for now, this is a concise way to get data from a view-only method.

We haven’t had the frontend call a mutable method for our project yet. We’ll get into that in the coming chapters when we’ll want to have a prize sent to the first person to solve the puzzle.

Let’s run our frontend on testnet! We won’t add any new concepts at this point in the chapter, but note that the near examples typically create an account for you automatically with a NodeJS command. We covered the important pattern of creating a subaccount and deploying the smart contract to it, so let’s stick with that pattern as we start up our frontend.

The last line sends the environment variable CONTRACT_NAME into the NodeJS script. This is picked up in the config.js file that’s used to set up the contract account and network configuration:

After running the last command to start the React app, you’ll be given a link to a local website, like https://localhost:1234. When you visit the site you’ll see the simple frontend that interacts with our smart contract: 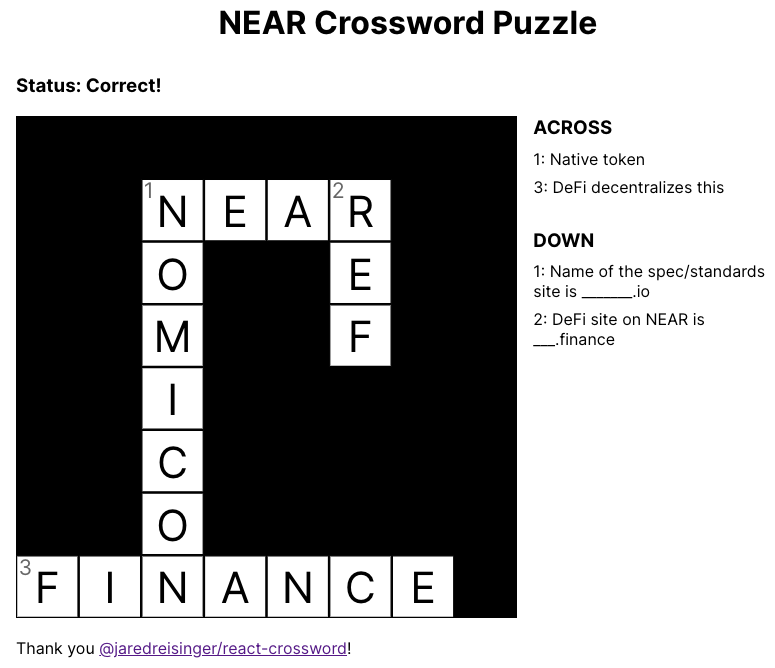 Again, the full code for this chapter is available at: